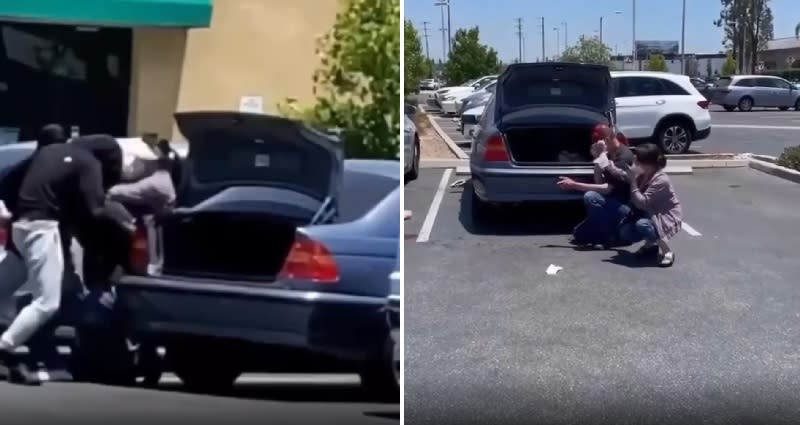 The Los Angeles County Sheriff’s Department (LASD) is now looking for two armed men who reportedly pistol-whipped an Asian man and woman during a violent robbery outside a 99 Ranch Market over the weekend.

The unidentified victims were loading their groceries into their car near a 99 Ranch Market in Rowland Heights at around 12:35 p.m. on Saturday when two armed men approached them and demanded the male victim’s $60,000 Rolex watch, according to the authorities.

Before the male victim could react, one of the assailants reportedly took out his gun and pistol-whipped the man while the other suspect did the same to the female victim.

A video of the incident shows the female victim yelling for help during the attack. In the aftermath, the two victims can be seen kneeling behind their car while the male victim’s head is covered in blood.

The two suspects reportedly took the male victim’s watch and fled the scene in a white Dodge Challenger with paper license plates. They were described as two men between the ages of 25 and 30, wearing black hoodies and gray sweatpants.

Similar incidents have been reported to the Temple Sheriff’s Station, which led the Walnut Sheriff’s Station to believe that the two suspects may have been involved in other past incidents. The two sheriff’s offices are now working together to investigate the attacks.

The LASD said on Sunday that there is no indication of a hate crime at the moment.

Property crime in the city has risen by 13.6% since 2021, according to the Los Angeles Police Department. The total number of violent crimes in the city reportedly rose by 8.2% this year.

Those who may have information about the incident are urged to contact local law enforcement. The LASD can be contacted at (213) 229-1700 or via their website.

More from NextShark: 15-Year-Old Called ‘Ch*nk’, Repeatedly Punched in the Head at Playground in Queens