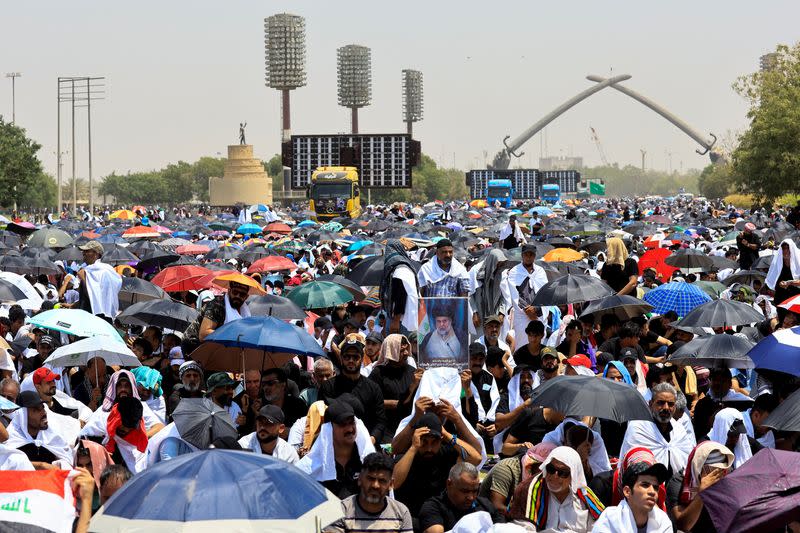 BAGHDAD (Reuters) – Tens of thousands of followers of Shi’ite cleric Moqtada al-Sadr prayed on Friday at an iconic Baghdad military parade ground built by the late President Saddam Hussein, in yet another symbolic display of Sadr’s sway over much of the Iraqi people.

Sadr has in the past week commanded his followers to storm Baghdad’s heavily secured Green Zone, occupy parliament and pray together as he refuses to let his political rivals form a government 10 months after elections.

Sadr was the biggest winner in an October election but failed to form a government free of Iranian allies as he had promised.

He withdrew his lawmakers from parliament and is now preventing the chamber from electing a new government and demanding early elections.

The populist leader counts millions of Iraqis among his followers and has shown he can still stir up gatherings by hundreds of thousands of supporters, mostly working-class Shi’ite Muslims, if he needs to exert political pressure.

Friday’s prayer took place at the famous Baghdad parade ground which stretches between two vast crossed sword arches, built under Saddam in the 1980s to commemorate the Iran-Iraq war.

The area is in the heart of the Green Zone which houses government buildings and embassies, including the parliament where Sadr’s supporters have staged a days-long sit-in.

Sadr’s father Mohammed Sadiq al-Sadr was murdered by Saddam’s regime for his outspoken opposition to the Sunni dictator. Sadr inherited his father’s followers.

When a U.S.-led invasion in 2003 toppled Saddam, Sadr began an insurgency against U.S. troops.

His new foes, however, are fellow Shi’ite leaders and parties mostly aligned with Iran, as Sadr has positioned himself as a nationalist who rejects foreign interference. Those groups, like Sadr, are backed by heavily-armed militias, but do not hold the same sway as he does over masses of fanatical followers.

The unrest brought Iraq close to new violence on Monday as Iran-aligned leaders staged counter-demonstrations which many Iraqis thought would lead to clashes between the two camps.