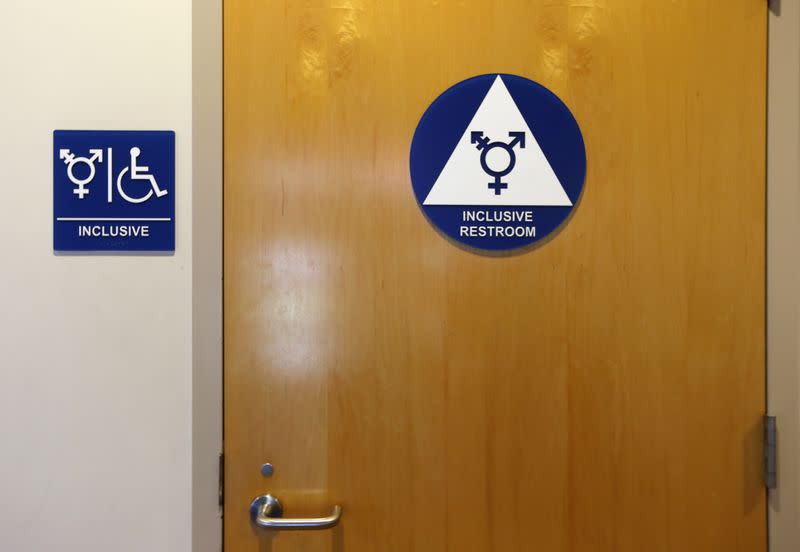 (Reuters) – A federal judge in Tennessee has temporarily blocked Biden administration directives allowing transgender workers and students to use bathrooms and locker rooms and join sports teams that correspond with their gender identity.

Judge Charles Atchley Jr. of the Eastern District of Tennessee ruled on Friday that the administration’s directives would make it impossible for some states to enforce their own laws on transgender athletes’ participation in girls’ sports and access to bathrooms.

A coalition of 20 Republican attorneys general brought a lawsuit last year against the federal government, noting that they stood to lose significant federal funding as the Biden directives were in conflict with their own state laws.

Atchley agreed with that, writing in his order that the states “cannot continue regulating pursuant to their state laws while simultaneously complying with Defendants’ guidance.”

Oklahoma Attorney General John O’Connor, one of the plaintiffs, said in a written statement on Saturday that Atchley’s order “is a major victory for women’s sports and for the privacy and safety of girls and women in their school bathrooms and locker rooms.”

The Justice Department, the Department of Education and the Equal Employment Opportunity Commission are named as defendants in the lawsuit. None immediately replied to requests for comment on Saturday. The three had earlier requested that Atchley dismiss the states’ lawsuit, a motion the judge denied in his Friday ruling.

The top court in Bostock v. Clayton County said employers cannot terminate workers because of their gender identity or sexuality. The justices expressly declined to decide if the ruling applied to sex-segregated bathrooms and locker rooms.

The Supreme Court in Bostock held that the bar on workplace sex discrimination in Title VII of the Civil Rights Act of 1964 extended to bias based on sexual orientation and gender identity.

The department said, for example, that preventing a transgender high school girl from using the girls’ restroom or trying out for the girls’ cheerleading team would violate Title IX.

Atchley on Friday agreed with the states, writing in his ruling that the Supreme Court in Bostock “explicitly refused to decide whether ‘sex-segregated bathrooms, locker rooms, and dress codes’ violate Title VII.”