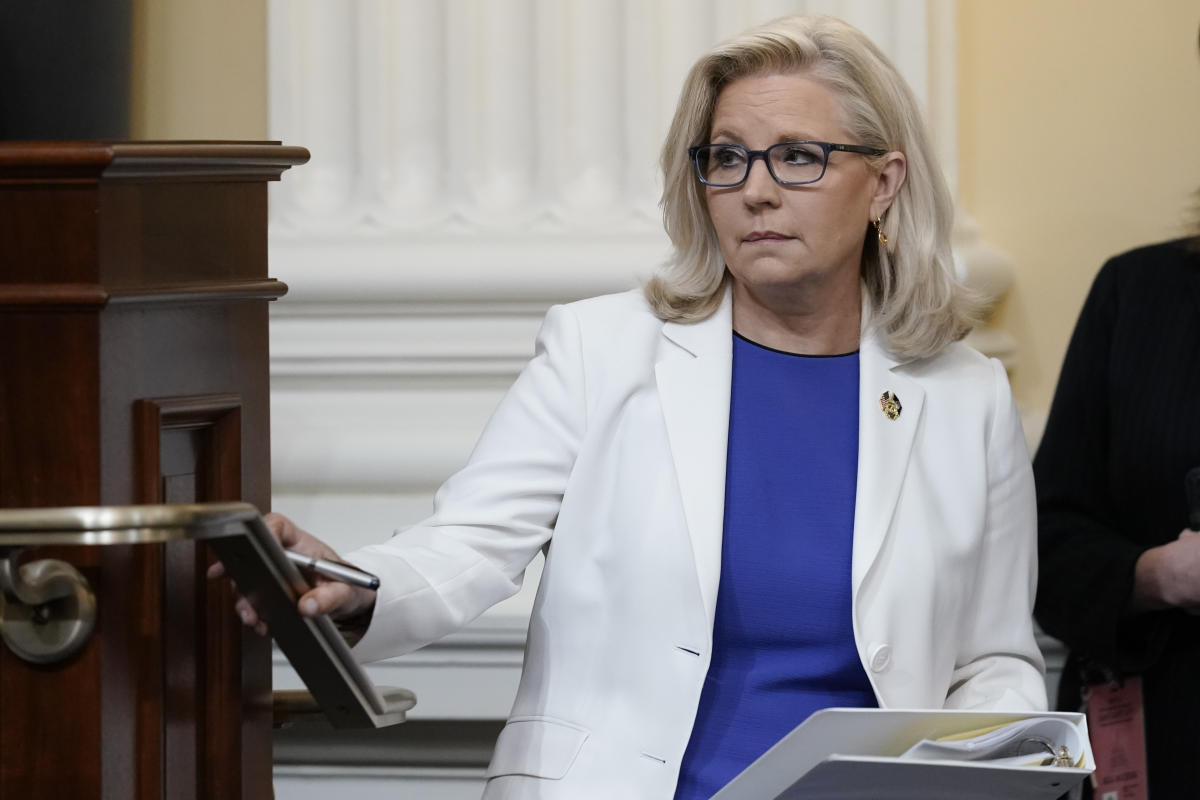 CHEYENNE, Wyo. — It was just over a month before her primary, but Rep. Liz Cheney, R-Wyo., was nowhere near the voters weighing her future.

Cheney was instead huddled with fellow lawmakers and aides in the Capitol complex, bucking up her allies in a cause she believes is more important than her House seat: ridding American politics of former President Donald J Trump and his influence.

“The nine of us have done more to prevent Trump from ever regaining power than any group to date,” she said to fellow members of the panel investigating Trump’s involvement in the Jan. 6 Capitol attack. “We can’t let up.”

Sign up for The Morning newsletter from the New York Times

The most closely watched primary of 2022 has not become much of a race at all. Polls show Cheney losing badly to her rival, Harriet Hageman, Trump’s vehicle for revenge, and the congresswoman has been all but driven out of her Trump-loving state, in part because of death threats, her office says.

Yet for Cheney, the race stopped being about political survival months ago. Instead, she’s used the Aug. 16 contest as a sort of a high-profile stage for her martyrdom — and a proving ground for her new crusade. She used the only debate to tell voters to “vote for somebody else” if they wanted a politician who would violate their oath of office. Last week, she enlisted her father, former Vice President Dick Cheney, to cut an ad calling Trump a “coward” who represents the greatest threat to the U.S. in the history of the republic.

In a state where Trump won 70% of the vote two years ago, Liz Cheney might as well be asking ranchers to go vegan.

“If the cost of standing up for the Constitution is losing the House seat, then that’s a price I’m willing to pay,” she said in an interview last week in the conference room of a Cheyenne bank.

The 56-year-old daughter of a politician who once had visions of rising to the top of the House leadership — but landed as vice president instead — has become arguably the most consequential rank-and-file member of Congress in modern times. Few others have so aggressively used the levers of the office to attempt to reroute the course of American politics — but, in doing so, she has effectively sacrificed her own future in the institution she grew up to revere.

Cheney’s relentless focus on Trump has driven speculation — even among longtime family friends — that she is preparing to run for president. She has done little to dissuade such talk.

At a house party Thursday night in Cheyenne, with former Vice President Dick Cheney happily looking on under a pair of mounted leather chaps, the host introduced Liz Cheney by recalling how another Republican woman, Maine Sen. Margaret Chase Smith, confronted Sen. Joseph McCarthy when doing so was unpopular — and went on to become the first female candidate for president from a major party.

The attendees applauded at the parallel as Cheney smiled.

In the interview, she said she was focused on her primary — and her work on the committee. But it’s far from clear that she could be a viable candidate in the current Republican Party, or whether she has interest in the donor-class schemes about a third-party bid, in part because she knows it may just siphon votes from a Democrat opposing Trump.

Cheney said she had no interest in changing parties: “I’m a Republican.” But when asked if the GOP she was raised in was even salvageable in the short term, she said: “It may not be” and called her party “very sick.”

The party, she said, “is continuing to drive itself in a ditch, and I think it’s going to take several cycles if it can be healed.”

Cheney suggested she was animated as much by Trumpism as Trump himself. She could support a Republican for president in 2024, she said, but her red line is a refusal to state clearly that Trump lost a legitimate election in 2020.

Asked if the ranks of off-limits candidates included Gov. Ron DeSantis of Florida, whom many Republicans have latched onto as a Trump alternative, she said she “would find it very difficult” to support DeSantis in a general election.

“I think that Ron DeSantis has lined himself up almost entirely with Donald Trump, and I think that’s very dangerous,” Cheney said.

It’s easy to hear other soundings of a White House bid in Cheney’s rhetoric.

In Cheyenne, she channeled the worries of “moms” and what she described as their hunger for “somebody’s who’s competent.” Having once largely scorned identity politics — Cheney was the only female lawmaker who wouldn’t pose for a picture of the women of the 116th Congress — she now freely discusses gender and her perspective as a mother.

“These days, for the most part, men are running the world, and it is really not going that well,” she said in June when she spoke at the Ronald Reagan Presidential Library in Simi Valley, California.

In a sign that Cheney’s political awakening goes beyond her contempt for Trump, she said she prefers the ranks of Democratic women with national security backgrounds to her party’s right flank.

“I would much rather serve with Mikie Sherrill and Chrissy Houlahan and Elissa Slotkin than Marjorie Taylor Greene and Lauren Boebert, even though on substance certainly I have big disagreements with the Democratic women I just mentioned,” Cheney said in the interview. “But they love this country, they do their homework, and they are people that are trying to do the right thing for the country.”

Cheney is surer of her diagnosis for what ails the GOP than she is of her prescription for reform.

She has no post-Congress political organization in waiting and has benefited from Democratic donors, whose affections may be fleeting. To the frustration of some allies, she has not expanded her inner circle beyond family and a handful of close advisers. Never much of a schmoozer, she said she longed for what she recalled as her father’s era of policy-centric politics.

“What the country needs are serious people who are willing to engage in debates about policy,” Cheney said.

It’s all a far cry from the Cheney of a decade ago, who had a contract to appear regularly on Fox News and would use her perch as a guest host for Sean Hannity to present her unswerving conservative views and savage former President Barack Obama and Democrats.

Today, Cheney doesn’t concede specific regrets about helping to create the atmosphere that gave rise to Trump’s takeover of her party. She did, however, acknowledge a “reflexive partisanship that I have been guilty of” and noted Jan. 6 “demonstrated how dangerous that is.”

Few lawmakers today face those dangers as regularly as Cheney, who has had a full-time Capitol Police security detail for nearly a year because of the threats against her — protection few rank-and-file lawmakers are assigned. She no longer provides advance notice about her Wyoming travel and, not welcome at most county and state Republican events, has turned her campaign into a series of invite-only House parties.

What’s more puzzling than her schedule is why Cheney, who has raised over $13 million, has not poured more money into the race, especially early on when she had an opportunity to define Hageman. Cheney had spent roughly half her war chest as of the start of July, spurring speculation that she was saving money for future efforts against Trump.

Cheney long ago stopped attending meetings of House Republicans. When at the Capitol, she spends much of her time with the Democrats on the Jan. 6 panel and often heads to the Lindy Boggs Room, the reception room for female lawmakers, rather than the House floor with the male-dominated House GOP conference. Some members of the Jan. 6 panel have been struck by how often her Zoom background is her suburban Virginia home.

In Washington, even some Republicans who are also eager to move on from Trump question Cheney’s decision to wage open war against her own party. She’s limiting her future influence, they argue.

“It depends on if you want to go out in a blaze of glory and be ineffective or if you want to try to be effective,” said Sen. John Cornyn of Texas, who has his own future leadership aspirations. “I respect her, but I wouldn’t have made the same choice.”

Cheney is mindful that the Jan. 6 inquiry, with its prime-time hearings, is viewed by critics as an attention-seeking opportunity. She has turned down some opportunities that could have been helpful to her ambitions, most notably proposals from documentary filmmakers.

Still, to her skeptics at home, Cheney’s attacks on Trump have resurrected dormant questions about her ties to the state and raised fears that she has gone Washington and taken up with the opposition, dismissing the political views of the voters who gave her and her father their starts in electoral politics.

At a parade in Casper last month, held while Cheney was in Washington preparing for a hearing, Hageman received frequent applause from voters who said the incumbent had lost her way.

“Her voting record is not bad,” said Julie Hitt, a Casper resident. “But so much of her focus is on Jan 6.”

“She’s so in bed with the Democrats, with Pelosi and with all them people,” Bruce Hitt, Hitt’s husband, interjected, referring to House Speaker Nancy Pelosi.

Notably, no voters interviewed at the parade brought up Cheney’s support for the gun control bill the House passed just weeks earlier — the sort of apostasy that would have infuriated Wyoming Republicans in an era more dominated by policy than one man’s persona.

“Her vote on the gun bill hardly got any publicity whatsoever,” Mike Sullivan, a former Democratic governor of Wyoming who intends to vote for Cheney in the primary, said, puzzled. (Cheney is pushing independents and Democrats to re-register as Republicans, as least long enough to vote for her in the primary.)

For Cheney, any sense of bafflement about this moment — a Cheney, Republican royalty, being effectively read out of the party — has faded in the year and a half since the Capitol attack.

When she attended the funeral last year for Mike Enzi, the former Wyoming senator, Cheney welcomed a visiting delegation of GOP senators. As she greeted them one by one, several praised her bravery and told her keep up the fight against Trump, she recalled.

She did not miss the opportunity to pointedly remind them: They, too, could join her.

“There have been so many moments like that,” she said at the bank, a touch of weariness in her voice.