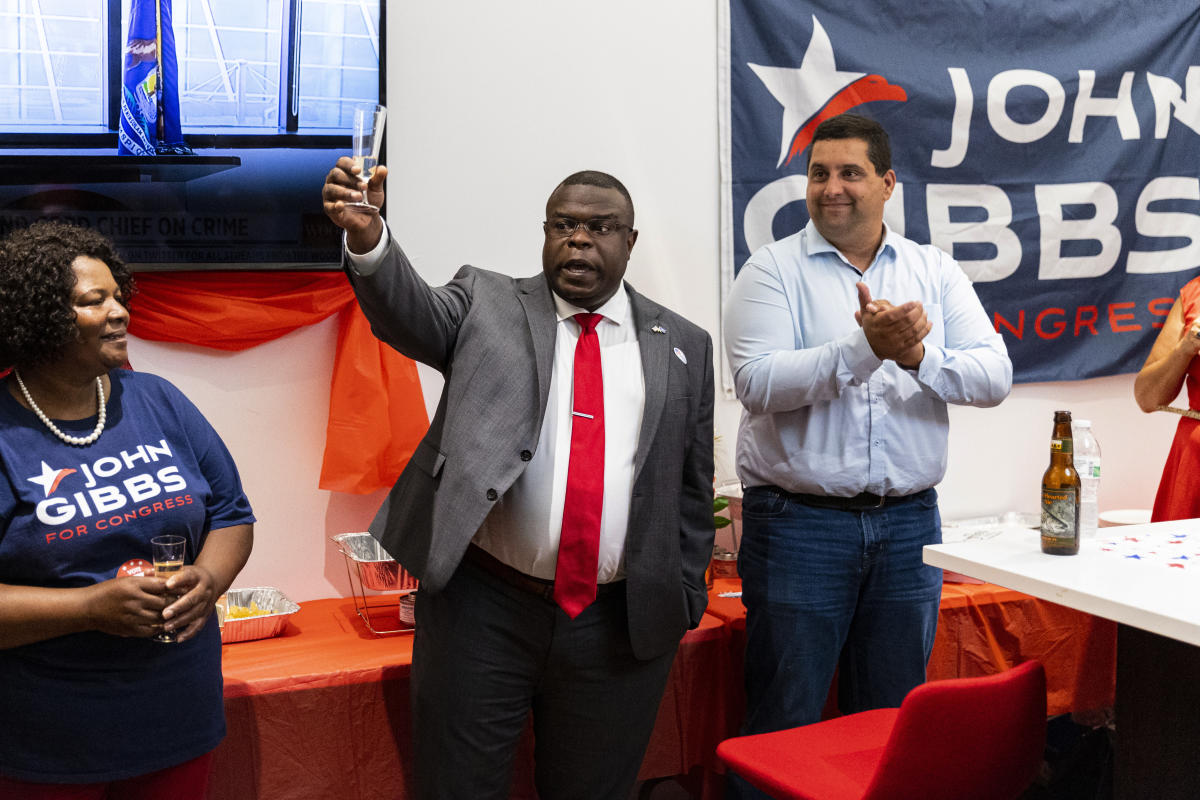 Democrats can see glimmers of new midterm life, after the stunning defeat of an anti-abortion measure in Kansas. Eric Greitens is the big loser in Missouri — which means the Republican Party as a whole won. And in Michigan, Rep. Peter Meijer has conceded in a primary fueled by his vote to impeach former President Donald Trump.

Votes are still being counted in some of the most important races. But as the multi-state primary made its return on Tuesday after a summer hiatus, the shape of the general election landscape fell more clearly into view.

Here are five takeaways from the first primary night of August:

The Roe earthquake is real

It would have been a victory for Democrats and abortion rights activists if they’d even kept it close in Kansas.

Instead, as the heavily Republican state rejected an anti-abortion constitutional amendment, it marked a political earthquake with the potential to reshape the entire midterm campaign.

In the first test of abortion politics since the Supreme Court overturned Roe v. Wade, turnout soared in Kansas despite a heat advisory and little else to draw Democrats to the polls. Yet in a state where Trump beat President Joe Biden by nearly 15 percentage points in 2020, the amendment was failing badly — in a brushback to Republican legislators who were preparing to move legislation restricting abortion.

And if the politics of Roe proved fraught for Republicans in Kansas, it’s going to be even more treacherous for the GOP in swing-ier, more moderate swaths of the country.

“I think it should indicate both in Kansas and nationally that people can be energized around the notion that the Republicans are determined to have government mandates about women’s healthcare decisions, and that is something that doesn’t sit well with lots of people,” said former Kansas Gov. Kathleen Sebelius, who served as Health and Human Services secretary in the Obama administration.

The Roe decision, she said, “has lit people on fire.”

In a bleak midterm election landscape for Democrats, Roe almost certainly won’t be enough to keep Republicans from winning the House. And the result in Kansas isn’t a perfect indicator of how voters will treat abortion in candidate races. The question voters were deciding there was a state constitutional amendment that would have cleared a path for the state legislature to ban abortion, not a candidate race where multiple issues and personalities are at play.

Still, the outcome in Kansas was the first real evidence supporting a near-universal consensus among Democratic and Republican political operatives alike: That Roe will likely help Democrats at the margins in November, energizing base Democrats and improving the party’s standing with independents and suburban women.

The challenge for Democrats now will be to attach their candidates to abortion rights — and to hammer Republicans on the issue in the fall — while Republicans will labor to keep the focus on rising prices and talk about anything other than Roe.

Republicans make it easier on themselves

Republicans dodged two bullets on Tuesday. In Missouri, Eric Greitens, the disgraced former governor, finished far behind in his Senate primary bid. And in Michigan, Tudor Dixon emerged from a gubernatorial primary full of more hard-line contenders many Republicans feared would be a drag on the party in November.

That’s good news for the GOP. And it’s a departure from where the party appeared to be heading in many of its early primaries — picking candidates who seem dangerously prone to getting in the way of the good political environment for Republicans.

In Pennsylvania, physician Mehmet Oz, the Republican nominee for Senate, has been polling so poorly Republicans are discussing alternative paths to the Senate majority. Republicans all but conceded the gubernatorial race in heavily-Democratic Maryland after nominating Dan Cox, the Trump-endorsed state lawmaker who organized buses to Washington for the rally preceding the riot at the Capitol on Jan. 6, 2021.

It’s possible the early results on Tuesday will turn out to be a blip. In Arizona, Mark Finchem, an election denier running for secretary of state with Trump’s endorsement, was running ahead. And overall in this year’s primaries, said Jason Roe, the former executive director of the state Republican Party in Michigan, “I think in a lot of cases we have nominated our weakest general election candidates, so the primaries have not served us well.”

But for the traditionalist wing of the Republican Party, the early indications on Tuesday were mostly positive. An exception: Kari Lake, the Trump-endorsed candidate for governor who still insists, falsely, that Trump won the 2020 election, pulled ahead of Karrin Taylor Robson, the establishment-backed candidate, as vote-counting continued through Wednesday morning.

But in a House district in the state, Ron Watkins, a celebrity in the QAnon conspiracy world, was barely even registering.

And then there were the three House Republicans who voted to impeach Trump. One of them, Meijer, lost in Michigan. But in Washington, Reps. Jaime Herrera Beutler and Dan Newhouse were both in position to survive their primaries if early returns hold.

Eighteen months ago, days after casting one of his first votes in Congress for the impeachment of Donald Trump, Meijer purchased a flak jacket to protect himself from mortal danger. The political danger, though, has hung over him ever since.

West Michigan Republicans unleashed their wrath Tuesday on the first-term congressman and scion of the Midwestern supermarket chain that shares his last name. They never forgave the 34-year-old combat vet for that vote — and it’s particularly notable that someone with that last name, in this place, couldn’t outrun it, even though Meijer’s legislative record has him on track to pass more laws than any House Republican freshman in decades.

Meijer has now become the second pro-impeachment Republican to lose a primary, falling to Trump-backed John Gibbs, the former Trump administration Housing and Urban Development official and software engineer who moved to the district to challenge the congressman.

The former president “still [has] a very, very strong following with very reliable Republican voters,” a source close to the Meijer campaign told POLITICO Tuesday evening. “And I think John Gibbs spent pretty much the entirety of the campaign preaching to the Trump faithful.”

Early Wednesday, Meijer had fallen behind Gibbs by more than a thousand votes. After midnight, the Gibbs campaign was already celebrating. “We are toasting,” AnneMarie Schieber, Gibbs’ spokesperson said. “And praising God. The people’s voice is heard.”

Meanwhile, the House Democratic campaign arm’s decision to bankroll Gibbs’ campaign to the tune of $425,000 down the homestretch looked all the more consequential—comparable to what Gibbs raised the entire cycle. The Democrats’ decision meant “they were seeing something that spooked them,” the Meijer source said, “and that was the prospect of Peter Meijer winning and going into a rematch versus [Democratic nominee] Hillary Scholten.”

“Meijer ran a tactically sound campaign, spent enormous money relative to Gibbs, and it’s hard to gauge the built-in value of the Meijer last name in Michigan,” said Jeff Timmer, the former executive director of the Michigan Republican Party and a senior adviser to the anti-Trump Lincoln Project.

But in this case, even the Meijer name wasn’t enough to overcome political gravity of a party that still orbits Trump. “Gibbs had no money and ran a shitty amateurish campaign,” Timmer said. “But he didn’t vote for impeachment and Gibbs will win.”

Mark Finchem has captured the Republican secretary of state nomination in Arizona. But the notorious election denier is just the tip of the iceberg.

Finchem, a state lawmaker, built a decisive lead over a splintered field in Arizona for secretary of state. Now, he is joining a growing cohort of diehard Trump loyalists who will be in competitive general elections to be their states’ next chief election officer.

Republicans have, in some cases, avoided the most extreme candidate for other statewide battleground offices. But in many swing states, Republican voters have done the opposite in secretary of state contests, rewarding candidates who have done the most to undermine trust in the electoral system.

Their elevation to the statewide ticket could hamper other Republican candidates — who would have to answer for a running mate’s election denialism, as many try to dance around the question in front of a general election audience. And their presence would ensure that, instead of moving past the lies about the 2020 election, they would remain center stage well into 2022.

That class of conspiracy theorists includes Nevada’s Jim Marchant and Michigan’s Kristina Karamo, alongside Pennsylvania gubernatorial nominee Doug Mastriano, who would appoint the state’s leading election official if he wins in November.

Just one of them winning in November could set up an unprecedented — and dangerous — situation in which an election official’s first priority is not running a fair election, but trying to vindicate the fantasies of a former president.

And yet … Trump takes a hit

Finchem may have won in Arizona and Meijer lost his seat in Michigan. But two other House Republicans who, like Meijer, voted to impeach Trump were in far better shape on Tuesday in early returns.

If Reps. Jaime Herrera Beutler and Dan Newhouse of Washington survive their primaries, impeachment backers will go 2-for-3.

And if the results shift and they don’t make it? The fact that the outcome in any race hinging on impeachment is even close is indicative of a gradual weakening of Trump’s hold on the GOP. Impeachment for Trump-ists was not a minor offense, after all, but the gravest sin.

The standard — and fair — knock on Trump’s midterm endorsement record is that it’s padded, with the former president going in for any number of Republicans who face nominal or no opposition at all. His farcical endorsement in Tuesday’s Missouri Senate primary of “Eric” — in a race featuring both Eric Greitens and eventual winner Eric Schmitt — underscored the point.

But the real evolution in Trump’s endorsement record may be its diminishing significance. Yes, he can still pull a Republican across the finish line, and he may be the most dominant force in the party. But he isn’t the only one anymore.

John Thomas, a Republican strategist who works on House campaigns across the country, said late Tuesday that Republicans “playing for keeps in November” may have started by nominating “some of the more electable candidates tonight.”

Republicans, he said, were “willing to buck Trump in certain circumstances to protect their chances of victory in November.”