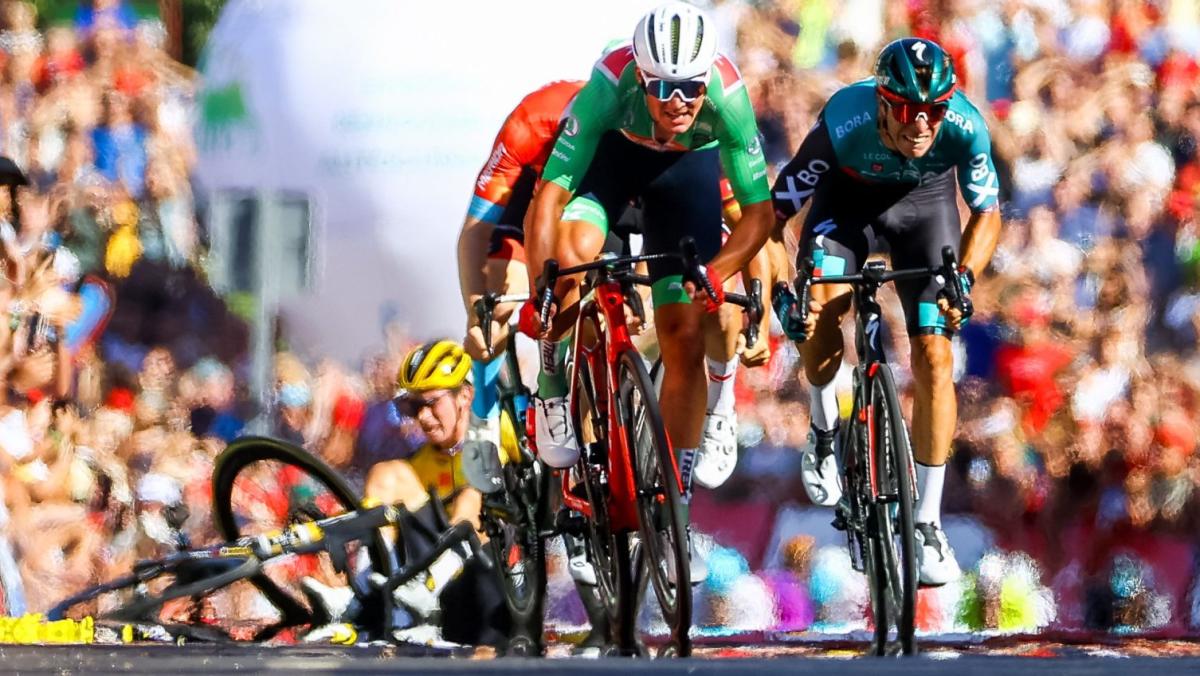 TOMARES, Spain — Primoz Roglic crashed with the finish line in sight in the Spanish Vuelta but still gained ground on Remco Evenepoel after the overall leader had a puncture a few kilometers from the end.

Neither rider lost time because of their mishaps as they benefitted from a 3-kilometer (1.8-mile) protection zone at the end of the stage.

Roglic was bleeding from his right shoulder, arm, and leg as he crossed the line in Stage 16. The three-time defending champion was going for the victory but went down hard with 75 meters to go while trying to catch up to the leading breakaway group of four riders.

Mads Pedersen won the stage for his second victory with team Trek-Segafredo in this year’s Vuelta. He prevailed over Pascal Ackermann and Danny van Poppel.

“Everyone was really on the limit,” Pedersen said. “It’s a pity that (Roglic) crashed, he hasn’t been lucky this year. I hope he’s not too bad, so he can keep contending for the victory.”

Roglic, seeking an unprecedented fourth straight Vuelta title with team Jumbo-Visma, had his preparation for the final Grand Tour race of the season hindered by a crash at the Tour de France.

The Slovenian would have been at least fifth in the stage. He ended finishing 35th but was given the time of the leading group.

Evenepoel also didn’t lose time because of his puncture in the final kilometers, losing only eight seconds to Roglic, who now is 1 minute, 26 seconds back entering the decisive final stages. Enric Mas is more than two minutes behind Evenepoel in third place.

“I wanted to move up on the steep bump but my rear wheel just went off,” said Evenepoel, the Belgian rider from team Quick-Step Alpha Vinyl. “I’m happy that the 3-kilometer rule exists, otherwise I would have lost a lot of time today.”

It is the 11th consecutive stage Evenepoel has held the leader’s red jersey, the longest run since Roglic took his first Vuelta win in 2019.

“I expected him to attack,” Evenepoel said of Roglic. “We all know that Primoz is really explosive so a finale like this is really made for him. That makes it even more a pity that he crashed. You never want anybody to crash.”

Riders were coming off a rest day. In Stage 17, they will face another difficult test with an unprecedented summit finish at Monasterio de Tentudia.