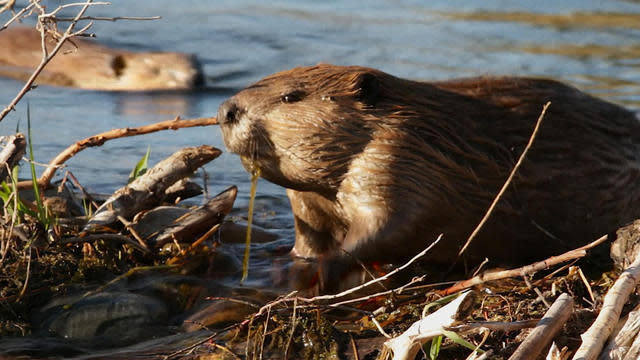 As nearly 40% of the country is currently in drought, scientists are looking to the largest rodent in North America for help: the beaver. Researchers in California and Utah found that dams made by the animals can help create drought- and fire-resistant landscapes.

According to Fairfax’s research, the dams beavers make out of sticks and mud help to prevent rainwater and snowmelt from draining down rivers and into oceans. Instead, the dams work as a natural fire break and reservoir capable of storing water for years that gets released into land slowly over time to create a more fire- and drought-resistant landscape.

“A lot of the water in California is not from snowmelt. It’s from the groundwater and these beavers are recharging it for us,” Fairfax said. “They are sort of depositing water into the bank that we take out at a later date.”

But with so many of the animals removed from ecosystems due to hunting, scientists are now helping to reintroduce the beaver into environments that need them most.

Scientists from Utah State University trap beavers from places where they are considered pests and take them back to a lab where they’re weighed, checked for injuries and implanted with chips for tracking and research purposes. The beavers are then put into a bunker where they wait until they’re released into drought- and fire-prone areas with the hopes that they’ll create their own colonies.

“It’s kind of a win-win,” researcher Nick Bouwes with the Beaver Ecology and Relocation Center told Vigliotti. “We deal with the nuisance problem at the same time trying to use an animal that’s incredibly good at restoring streams and putting them to work.”

“It’s amazing all the steps that we have to do to help out something that should be a natural process,” Bouwes said.

More than 1,000 analog dams have been successfully resettled with even more in the works.

Scorching heat wave in the forecast for western U.S. this Labor Day weekend