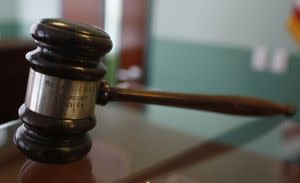 A 40-year-old Seattle man has been charged with a hate crime in connection with an attack on two women in downtown Seattle on Monday.

According to charging documents, Michael John Allen is being charged with one count of a hate crime against a woman of Asian descent, as well as a count of fourth-degree assault against another woman.

At 5:23 p.m. Monday, Seattle officers were called to 3rd Avenue and Union Street for a report of a man punching multiple people on the street. Officers were later advised that the man appeared to be targeting Asians.

Officers caught up with the man, later identified as Allen, and detained him near 3rd Avenue and Union Street.

While that was happening, officers were contacted by a woman near 4th Avenue and Pike Street, who said she had been struck in the back of the head in the 500 block of Olive Way, near the Bank of America.

According to charging documents, the woman told police that the attack on her was “unprovoked,” and the man had screamed things such as: “You f****** dumb b****, I hate you! F*** you I hate you!”

The woman told police she did not believe she was assaulted based on her gender or race.

The woman also told police that the man began yelling at two Asian woman, telling them to “Go back to China!”

Another woman who called 911 after she witnessed the man yelling at the two women, “Go back to China!” told police she saw the women running from the man and noted that they looked scared.

Another officer who was contacted by an area security guard told the officer that two women had been attacked by a man, who was heading south on 4th Avenue toward Union.

The officer found the victims, who were visiting Seattle, inside a store.

The women told police that they were walking in the park when a man started yelling at them, saying to something to the effect of “Go back to f****** China,” according to police records.

One of the women said she picked up her pace to get away but the man managed to catch up with her friend.

The victim told police that the man punched her in the back of her left shoulder, police records state.

According to court records, the women, both Chinese nationals, told officers they felt they were targeted because they were Asian.

Allen, who was described as the suspect, was booked into the King County Jail.

Of the 235 hate crimes filed between 2018 and Thursday, July 14, there is clear data for 187 of them. The authorities are working to enter data on the remaining cases. A case can have multiple types of hateful acts or involve multiple anti-bias acts. That’s why there are 187 of 235 cases with clear, entered data:

Among anti-race/ethnicity hate crimes, anti-Black hate crimes are the most common.