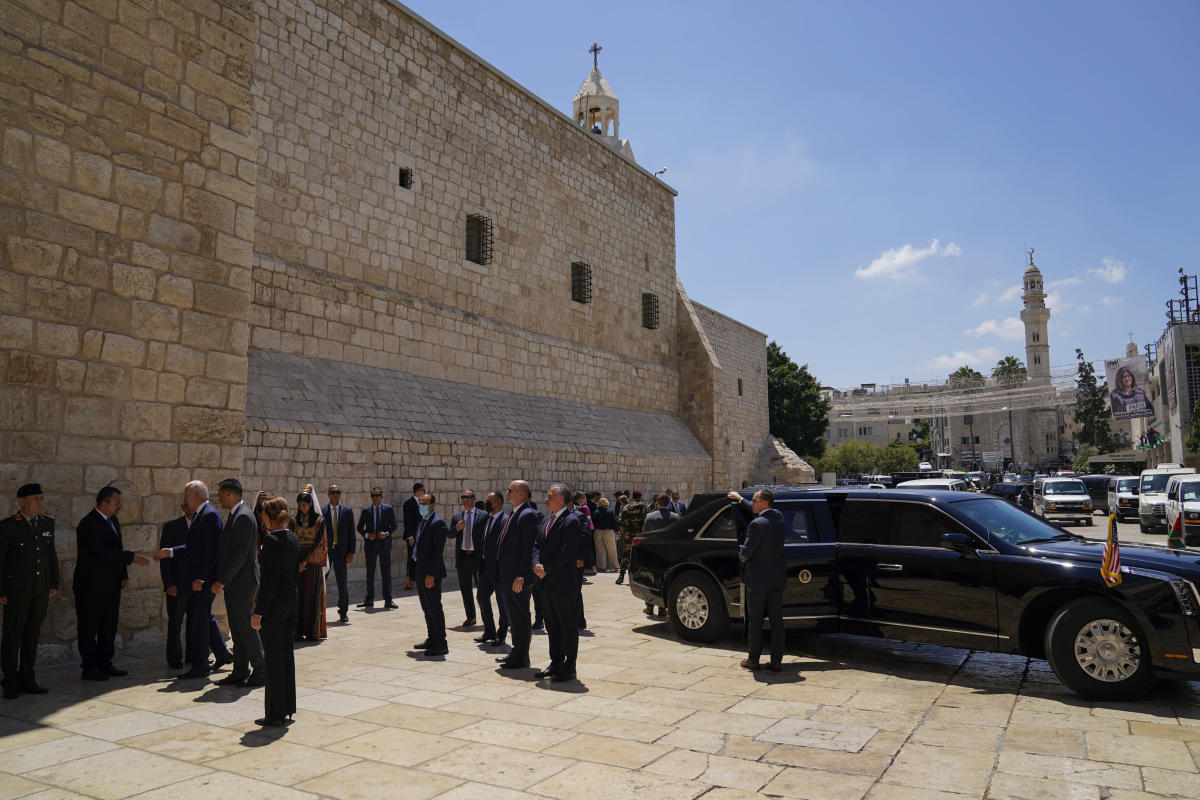 The Latest on U.S. President Joe Biden’s trip to the Mideast:

BETHLEHEM, West Bank — President Joe Biden is visiting the Church of the Nativity in Bethlehem, believed by Christians to be the birthplace of Jesus.

Biden, a devout Roman Catholic, stopped by the church Friday after meeting with Palestinian leaders in the ancient West Bank city. He shook hands with local officials before entering the historic basilica, held sacred by Christians of all denominations.

The White House said Biden’s visit was to “underscore support for Christians who face challenges across the region.”

Inside, he was to meet with church patriarchs and receive a tour of its mosaics and architecture.

The visit is Biden’s last stop on his three-day trip to Israel and the occupied West Bank before he flies to Saudi Arabia to meet with the kingdom’s leaders and Gulf allies.

HERE’S WHAT ELSE IS HAPPENING:

As Biden visits, a look at those targeted in Saudi Arabia

Israeli politics a backdrop to Biden’s visit to the Mideast

BETHLEHEM, West Bank — President Joe Biden says the death of Palestinian-American journalist Shireen Abu Akleh was an “enormous loss to the essential work of sharing with the world the story of the Palestinian people.”

Speaking in Bethlehem alongside Palestinian Authority President Mahmoud Abbas, Biden said the U.S. “will continue to insist on a full and transparent accounting of her death and will continue to stand up for media freedom everywhere in the world.”

Biden, struggling to pronounce her name, said Abu Akleh “was performing very vital work” when she was killed in May.

The U.S. State Department concluded earlier this month that Abu Akleh was likely killed by Israeli fire as she reported on a military raid on the Jenin refugee camp in the West Bank. The report said it found no reason to suggest her killing was intentional.

Palestinian leaders, including Abbas, as well as Abu Akleh’s family, have rejected the State Department report and called for accountability for the Israeli military.

Speaking before Biden, Abbas said, “the killers of the martyr journalist Shireen Abu Akleh, they need to be held accountable.”

BETHLEHEM, West Bank — President Joe Biden says he remains supportive of an independent Palestinian state but says the “ground is not ripe” for restarting peace talks between Israel and the Palestinians.

Biden delivered the assessment at a news conference with the Palestinian president, Mahmoud Abbas, in the occupied West Bank.

The comments were likely to disappoint the Palestinians, who are looking to the U.S. to press Israel into restarting peace talks. The last substantive talks collapsed over a decade ago.

Biden said the world “cannot wait” for a peace agreement and said that steps need to be taken to improve the lives of Palestinian people.

Abbas said “the key to peace” in the region “begins with ending the Israeli occupation of our land.”

China’s Foreign Ministry said Friday it won’t take a backseat to the U.S. in the Middle East, as President Joe Biden visits the region to reassert American leadership and “not create a vacuum.”

“The Middle East is not the backyard of any other country and there is no such thing as vacuum in the region,” Chinese Foreign Ministry spokesperson Wang Wenbin told reporters in Beijing on Friday.

“We have made relentless efforts and played a key role in safeguarding peace, promoting development, and bringing a fair and equitable resolution on hotspot issues in the region,” Wang added. “China is ready to work with the international community to continue to play a positive role in realizing peace and development in the Middle East.”

Biden is using his trip to Israel, the West Bank and Saudi Arabia to shore up ties with regional partners.

BETHLEHEM, West Bank — President Joe Biden has arrived in the biblical town of Bethlehem in the occupied West Bank for talks with Palestinian President Mahmoud Abbas.

Biden was given a bouquet of flowers by a pair of Palestinian children as he arrived. He held his hand over his heart as a Palestinian band played the U.S. national anthem before he entered Abbas’ office.

The brief meeting with the Palestinian leader comes after two days of nonstop talks with Israeli leaders. Biden is then to continue to Saudi Arabia for talks with Arab leaders.

In the West Bank, Biden is expected to announce some $200 million in additional assistance to the Palestinians, after pledging $100 million to hospitals that serve Palestinians in east Jerusalem earlier Friday.

While voicing support for a Palestinian state, Biden is not expected to float any new diplomatic initiatives during his visit.

Palestinian officials have expressed disappointment over the U.S. inability to restart peace talks.

On his way from Jerusalem, Biden’s motorcade passed by a billboard posted by an Israeli human rights group saying, “Mr. President, this is apartheid.” Human rights groups say Israel’s treatment amounts to apartheid. Israel rejects the allegation as an attack on its legitimacy.

The popular Al-Jazeera correspondent was killed in May while covering an Israeli military raid in the West Bank.

The Palestinians, including colleagues who were with her, say that Israeli soldiers intentionally killed her. Israel says its troops were in a battle with Palestinian gunmen, and it’s not clear who fired the deadly bullet.

U.S. experts who inspected the bullet recently determined that Israeli fire likely killed her. But without providing evidence, they said there was no reason to believe the shooting was intentional. The findings have infuriated the Palestinians, including Abu Akleh’s family. The black T-shirts worn by journalists in Bethlehem, saying “Justice for Shireen,” were meant as a sign of solidarity with their slain colleague.

Biden was headed to the biblical town of Bethlehem to meet Palestinian President Mahmoud Abbas.

Biden has announced hundreds of millions of dollars of assistance to the Palestinians. But Palestinians are disappointed that there are no plans for a diplomatic initiative to promote the establishment of an independent Palestinian state.

JERUSALEM — President Joe Biden has announced $100 million in U.S. assistance for east Jerusalem hospitals that serve as “the backbone” of health care for Palestinians.

He spoke Friday during a visit to the Augusta Victoria Hospital, which provides advanced medical care, including radiation treatment for cancer patients and pediatric kidney dialysis, to Palestinians in the occupied West Bank and Gaza.

The funding is subject to approval by the U.S. Congress and would pay out over several years.

Biden called the six hospitals “the backbone of the Palestinian health care system.”

The aid came after the Trump administration slashed $25 million to the hospitals in 2018 as part of a larger suspension of aid to the Palestinians. Biden has restored much of that assistance since assuming office, but has made no progress in resuming the Israeli-Palestinian peace process, which collapsed more than a decade ago.

Biden was set to meet with Palestinian leaders in the occupied West Bank later on Friday.

Israel captured east Jerusalem, along with the West Bank and Gaza, in the 1967 Mideast war. The Palestinians want all three for their future state.

Israel annexed east Jerusalem in a move not recognized internationally and views the entire city as its capital. The Palestinians want east Jerusalem to be the capital of their future state, and its fate is at the heart of the century-old conflict.

The six east Jerusalem hospitals, which symbolize the Palestinian presence in the city, have faced a funding crisis in recent years, as the cash-strapped Palestinian Authority has struggled to pay for advanced treatment for Palestinians.

Augusta Victoria Hospital, which is operated by the Lutheran World Federation, ended 2021 in severe debt, with more than $70 million owed by the PA, according to a letter sent to U.S. lawmakers in May.

JERUSALEM — About two dozen pro-Palestinian demonstrators have gathered in east Jerusalem ahead of U.S. President Joe Biden’s visit to a local hospital.

The protesters on Friday are holding Palestinian flags and posters of Shireen Abu Akleh, a Palestinian-American journalist who was killed in May while covering an Israeli military raid in the occupied West Bank.

After two days of nonstop meetings with Israeli leaders, Biden is visiting the Augusta Victoria Hospital, which serves local Palestinians, before heading to Bethlehem to meet Palestinian President Mahmoud Abbas. The demonstration is several hundred meters (yards) from the hospital, with Israeli police standing at a distance outside the building. It was not clear if Biden’s motorcade would pass by the crowd.

Biden is expected to announce over $300 million in assistance for the Palestinians on Friday. While Biden has voiced support for a two-state solution between Israel and the Palestinians, there are no plans for any diplomatic initiative to resolve the decades-old conflict.

Israel captured east Jerusalem in the 1967 Mideast war and considers the entire city its capital. But its annexation of the eastern sector, home to the city’s most important religious sites, is not internationally recognized. The Palestinians seek east Jerusalem as the capital of a future state.

JERUSALEM — Saudi Arabia on Friday opened its airspace to “all air carriers,” signaling the end of its longstanding ban on Israeli flights overflying its territory — a key step toward normalization between the two nations as President Joe Biden visits the region.

In a statement posted to Twitter hours before Biden is set to become the first U.S. leader to fly directly from Israel to the kingdom, Saudi Arabia’s General Authority of Civil Aviation said it was announcing “the decision to open the Kingdom’s airspace for all air carriers that meet the requirements of the Authority for overflying.”

The announcement is an incremental step toward the normalization of relations between Saudi Arabia and Israel and builds on the strong but informal ties the erstwhile foes have developed recent years over their shared concerns about Iran’s growing influence in the region.

In recent years, Saudi Arabia has allowed flights between Israel and Gulf states to cross through its airspace. In 2020, then-Israeli Prime Minister Benjamin Netanyahu reportedly flew to Saudi Arabia for a meeting with Crown Prince Mohammed bin Salman, and last week several Israeli defense reporters visited the kingdom and published news reports about their welcome.