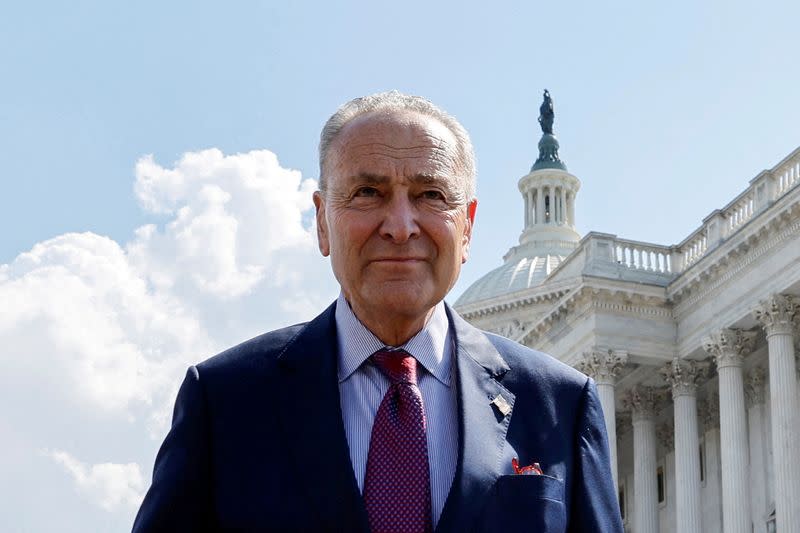 WASHINGTON (Reuters) -The U.S. Senate will convene on Saturday as Democrats seek to push through a $430 billion drug pricing, energy and tax bill over Republican objections, Majority Leader Chuck Schumer said on Thursday.

Schumer said the chamber would convene at noon to vote on a motion to proceed and then begin debate on the bill.

The bill known as the Inflation Reduction Act, introduced last week by Schumer and Democratic Senator Joe Manchin, represents a key priority for Democrats and President Joe Biden ahead of November’s election battle for control of the U.S. Congress.

With the 100-seat Senate split 50-50, Democrats plan to pass the bill without Republican support through a parliamentary process known as reconciliation.

But they cannot afford to lose support from a single lawmaker and one Democrat, Senator Kyrsten Sinema, has not voiced her position on the bill. Another worry is COVID-19 — senators can only vote in person, so Schumer will need his full caucus to be present and healthy to pass the measure if Republicans remain unified in opposition.

About half of Americans — some 49% — support the Inflation Reduction Act, including 69% of Democrats and 34% of Republicans, according to a Reuters/Ipsos poll conducted Aug. 3 and 4.

The most popular element of the bill is giving Medicare the power to negotiate drug prices, which 71% of respondents support, including 68% of Republicans.

The poll of 1,100 people has a credibility internal, a measure of precision, of 3.6 percentage points.